2 months ago 14 min read
By using our website, you agree to the use of our cookies.
Got it!
News

Microsoft is developing new features in Paint for Windows 10.

The classic Paint program, the way we all know it, will be replaced with a new Paint version in Windows 10. The Microsoft team is working on the release of an updated and more functional version packed with new features. This sounds like great news for the users, who are used to this very basic program. From simple editing to some small tasks, Paint has always been a vital part for every Windows user, but this time the Microsoft team wants to bring it to another level. With its improvements, the new version of Paint may easily be placed next to the other serious graphic editors available online.

The new Microsoft Paint for Windows 10 comes with 3D support.

The news about the new version of the program was announced recently by a Twitter user named WalkingCat. He released two teaser videos, in which he demonstrated the new interface of Paint and just a glimpse to some of its features.

From what is visible in the videos, the well-known interface has significantly changed. A lot of the differences come from the touch and pen optimization that Microsoft inputs. Most of the icons and tools are way bigger than before and the menu bar is gone. The navigation between the tools happens through a sidebar that opens, once you click on an icon. 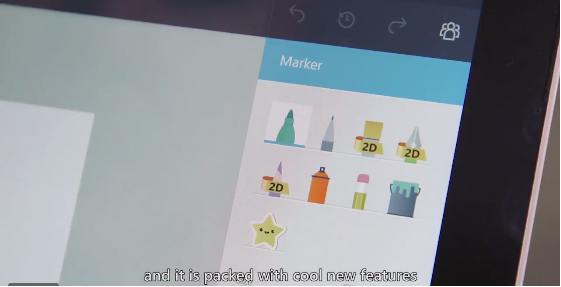 The 3D support for objects is probably one of the best features that comes in Paint for Windows 10. This is highlighted in the video, along with some stickers and community content features as well. It is expected that with all its new functionalities, Paint will probably be even more popular than 3D Builder, which is another application that Microsoft distributes with Windows 10.

Here is the Microsoft Paint Preview video itself.

Unlike the previous versions of Windows, where Pain was a built in program, this time in Windows 10 it will be offered as an application. The release of the new version, however, will probably happen earliest in the first half of 2017, when the Windows 10 Redstone 2 update is expected to be released.
Let us know what you think in the comments below – do you use Paint? Do you like the new interface of it?