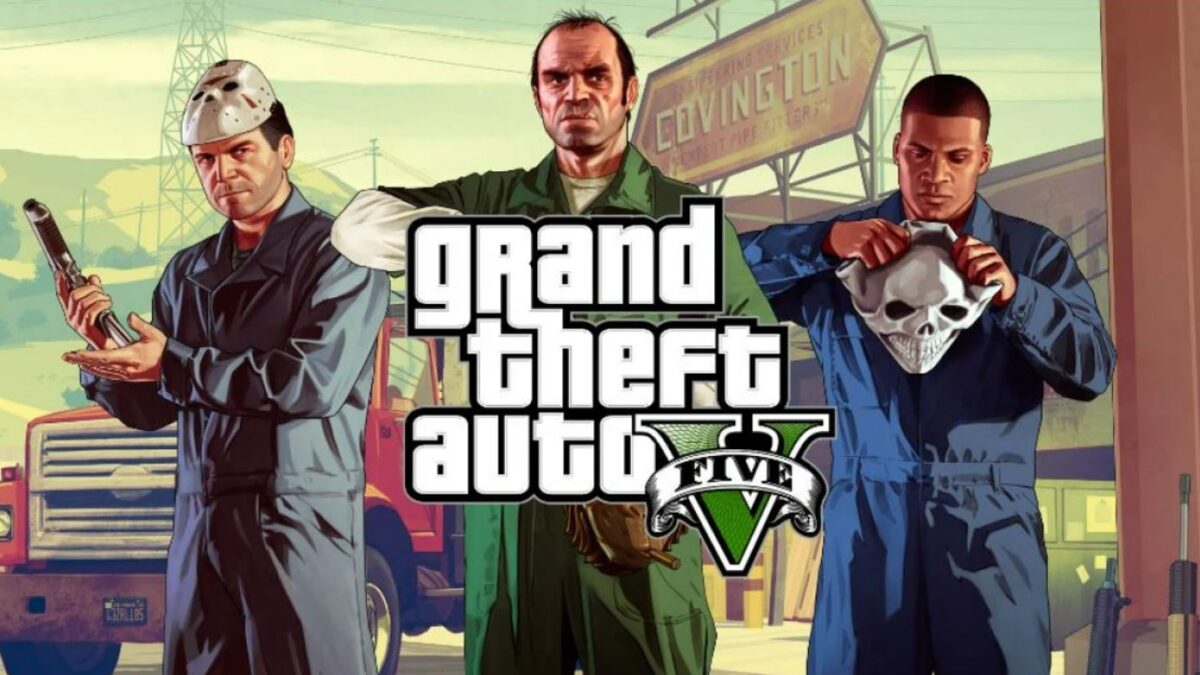 GTA V is officially not playable on Android, as it has no mobile version. However, through some simple trickery, you should be able to relatively easily get GTA V running on your Android device even if the game has no support whatsoever for mobile devices.

Before we show you the methods you can use to run GTA V on your smartphone or tablet, a couple of words about the game itself are in order. Unless you’ve been living under a rock for the past nine years, you must be well aware of what kind of game Rockstar’s GTA V is. It’s only the largest and most ambitious (and thus far, still the latest) installment in the notorious GTA gaming franchise. Of course, it’s been almost a decade since the game was released, so one may wonder if it’s still worth playing GTA V in 2022, which begs the question of how well the game holds up to the current gaming standards.

With its release back in September 2013, GTA V became an instant classic. It stayed true to the true and tested GTA formula, while improving nearly every aspect of the previous games – better graphics: check, a significantly larger map: check, gameplay: improvements: check. One of the few elements where maybe GTA V gets outshone by its immediate predecessor, GTA IV, is its story. Not that the story of V isn’t good, but IV’s story and protagonist were simply on another level. All in all, there’s a good reason why people are still talking about and playing GTA V all these years later. However, since we are already on the topic, let us what it is exactly that made this game such a masterpiece.

GTA V is a pretty game – maybe for 2022 its graphics may look aged, but they still hold up well and manage to deliver the spectacle that is expected of a Grand Theft Auto title. GTA V is also a pretty large game. It is by far the title in the franchise with the largest map, and by quite a lot at that. GTA San Andreas, the GTA game with the second-largest map in the series, offers a playable area that’s over two times smaller than that of GTA V. If you’ve played San Andreas back in the day, you probably remember just how incredibly large its map seemed. Now imagine that area doubled. Compared to GTA IV, the map of V is almost four times as large.

But map size isn’t the only way in which GTA V offers more. It also has a larger variety of vehicles, weapons, environments, gameplay features, etc. Ever since the earliest Grand Theft Auto games, Rockstar has tried to bring a living, breathing world to our PC and console screens, that shows a somewhat realistic representation of different parts of the United States, just so that the game’s developers can then go on to use that world as a scene for all the wacky and over-the-top scenarios featured in the game’s story. However, technological limitations have prevented that vision from getting truly realized until GTA V got released. The latter game could finally implement software and hardware resources that are advanced enough for the developers at Rockstar to be able to show the world that they’ve always wanted and, well, that world is amazing, and even all those years later, it can immerse you just as it did millions of players back in 2013.

As immersive as the rich world of GTA V maybe, that immersion would quickly break if it isn’t backed up by a good story. Rockstar has always shown that the fact that it creates open-world games doesn’t mean that those games cannot still have very good writing and a very good story. GTA V is certainly not an exception. In fact, the game does something that wasn’t a feature of its predecessors – it has not one, but three protagonists with storylines that intertwine and affect one another. The player gets to play with each of those characters, explore their lives, and progress their storylines. This makes for a very interesting and dynamic way of revealing the overall storyline of the game, especially since the three protagonists are so different from one another.

Each of the game’s protagonists basically represents a GTA character archetype – Michael is a sleazy conman who’s now retired, which somewhat reminds us of the protagonist in GTA Vice City, Tommy Vercetti. There’s also Franklin, an ambitious but still flawed character similar to CJ from GTA San Andreas. And then there’s Trevor. The best short description we could give to Trevor is that he represents the typical GTA playstyle: chaotic, violent, explosive, cynical, and ultimately unhinged, but also incredibly fun.

In other words, GTA V’s story is solid. As we said earlier, it may not be on the same level as the story in GTA IV, but it’s still highly engaging and enjoyable (granted that you enjoy the type of stories that GTA games are known for telling).

A game may be pretty, a game may have a great story, but in the end, for the majority of players, a game would always only be as good as its gameplay. Fortunately, this is yet another aspect where GTA V delivers. Almost everything in terms of gameplay has been improved compared to its predecessor, GTA IV. While the two games share a lot of similarities gameplay-wise, the newer GTA installment feels smoother, has more responsive controls, much better driving, and an improved cover and auto-aim systems. It also adds a lot of new features and mini-games, which helps further expand its already incredibly rich world, thus making it feel even more immersive and engaging. GTA V also features the best multiplayer of all the games in the GTA series, which is probably the main reason why so many people are still playing it all those years later.

All in all, if you have played any of the earlier GTA games and have enjoyed their gameplay, you will almost certainly like the gameplay in V as well. Obviously, some of its aspects may feel a bit outdated now but is unlikely to take away any of the fun.

Regardless of whether you are a GTA V veteran or a newcomer to the game, there is no shortage of reasons to visit/revisit one of the most influential and ambitious games ever created. Even though the game came out nearly a decade ago, its world, story, and gameplay have, no doubt, stood the test of time and would more than likely continue to do so for the years to come.

Can you play GTA V on Android?

GTA V doesn’t and will likely not have a mobile version in the near future, but current-day technology allows us to play it on mobile devices nonetheless. Similarly to streaming video to different devices, it’s also possible to stream games as well, including GTA V. Of course, you will need a good Internet connection to get decent gaming performance, but if you have that, you can stream GTA V to your Android device or to a wide selection of other devices by using either a cloud streaming service or by using a PC that you have that can run the game and has the game installed on it. If you are interested in trying out either of those options, below, we have prepared instructions for several methods of streaming GTA V to Android.

How to play GTA V on Android

To play GTA V on Android, you have two main options – to use cloud gaming, like Boosteroid, or to stream the game from your PC. The cloud gaming method of playing GTA on Android is recommended because it’s more accessible.

In this guide, we will show you four different methods of running GTA V on an Android device (smartphone, tablet) – one of them will involve using a cloud gaming service, and the remaining three will require a PC that’s capable of running the game so that you could use that PC to stream GTA V to your phone/tablet. As mentioned, we’d normally recommend the cloud gaming variant, as its only requirement is that you have a stable and relatively fast internet connection (>50mbps) and that you are subscribed to the specific cloud gaming service that you’ll be using. On the other hand, if you already have a PC that meets the requirements for GTA V and you simply want to be able to play the game on your phone while you are at home (near the PC), then you can use a hardware-streaming app to stream the game to your smartphone. Note that most cloud gaming services require a paid subscription. The PC-streaming options are free, but, obviously, they require you to have a Windows computer that’s fit for gaming.

One final note before we show you the instructions, know that no matter which method you decide to use, to play the game, you must already own it either on Steam or in Epic Games Store.

How to Play GTA V on Android using cloud gaming

To play GTA V with a Cloud Gaming service like Boosteroid you will first need to purchase the game. Limited time offer now available at CDkeys.com, buy GTA V Premium Edition -84% Off for $10.59 (RockStar Launcher).

Next, redeem your game on Rockstar.

Now you will need to register on Boosteroid. This allows you to add GTA V to their Cloud Gaming Library.

For an in-depth explanation of how to play GTA V with cloud gaming continue with the text below.

And there you have it, a quick, easy, and relatively cheap way of playing GTA V on your Android device at any time, in any place (provided there’s good Internet available).

Downloading GTA V on Android isn’t possible, but you can still play the game on your Android smartphone or tablet via streaming technology. You can stream and, thus, play GTA V on Android without needing to download it on a mobile device.

Above, we showed you how to use the Boosteroid cloud gaming service to stream GTA V to Android. Now, we will also give you instructions on how to play the game on an Android phone/tablet by streaming it from a Windows PC.

To play GTA V using this method, as we said, you must have access to a PC that is capable of running. Additionally, the game must already be installed on the computer. Having a good Internet connection is required here as well.

Lastly, before you try any of the next methods, you must also connect both your PC and your Android device to the same network in order for either of them to work.

Note: This method will only work with Steam. If you own GTA V in Epic Games Store, try either of the other two methods.

Note: Your PC must have an Nvidia graphics card to be able to stream games via Moonlight.

Note: To use AMD Link to stream games to your Android device, your PC must have an AMD graphics card.

PlayStation 4 Pro. Do You Need The Upgrade?