Redstone 2 users can now get rid of unwanted preinstalled apps.

An option that users have been asking for a long time now has been released with the latest update of Windows 10. It looks like apart from the many new features and optimizations that come along with the Windows 10 builds, Microsoft is also working on the user’s ability to customize the functionality of the new operating system. The latest build, released on the fast ring, comes with a useful improvement that now provides an option for users to remove more of the applications that come preinstalled with Windows 10.

This important functionality has been revealed by OneNote Central in a tweet post. The fast ring insiders can now easily remove the unwanted apps from the Settings menu by selecting “Apps & features” and clicking on “Uninstall”. There, all they have to do is select the applications they wish to uninstall and simply press the uninstall button. 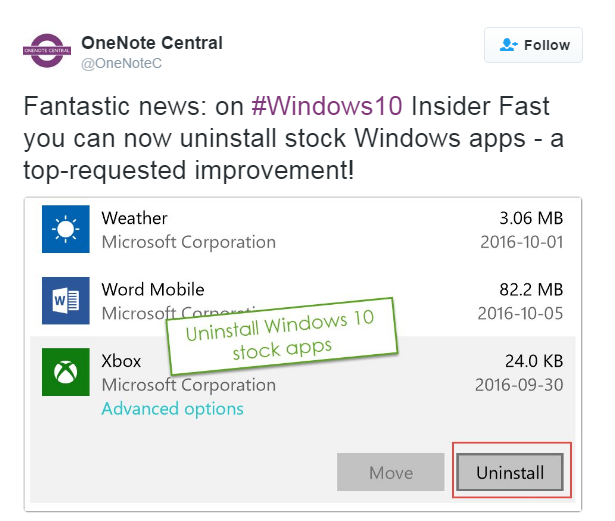 However, not all preinstalled apps can be removed at the moment. The good thing is that it appears that Microsoft is working on providing that important option for more apps. Hopefully, we will see them in the coming updates. The news about the Uninstall option was greeted by the Windows 10 users as a welcomed change, which will now enable them to get rid of the apps that they are not using anyway.

Another good thing is that the removed apps will not be reinstalled anymore when major updates and new builds are released. This means that once users remove a specific application, it will not come back when the OS is updated, until they manually restore it in their system. This functionality, which was implemented in build 14926, will most probably be included in the final Redstone 2 update, which is expected to be released in the spring of 2017 for retail users.

This is what Dona Sarkar, the head of the Windows Insider program, confirmed a few weeks ago:

“We’ve heard your feedback, and starting with Build 14926, when your PC updates it will check for apps that have been uninstalled, and it will preserve that state once the update has completed. This means if you uninstall any of the apps included in Windows 10 such as the Mail app or Maps app, they will not get reinstalled after you update to a newer build going forward”.

The next thing that is expected in the future builds of Windows 10 is for Microsoft to enable the uninstall option for all stock applications. This will be a welcomed functionality for many Windows 10 users, which will improve the overall user experience with this operating system.