Just when we thought that the Samsung saga with the burning Galaxy Note 7 was over, another device distributed by the company caught fire. This time a problem appeared with the Galaxy S7 Edge.

The incident with the burning Galaxy S7 Edge has been recently reported by PhoneArena, which has received this information from a loyal reader. The source, who requested his anonymity to be kept, told about a customer, who came to the retailer with a burnt S7 Edge phone, which he had received just two weeks back. The phone had been received as a replacement for the Galaxy Note 7. However, as per the customer’s words, the new S7 Edge phone caught fire while being charged with an OEM charger. The owner reported that while the device was left for charging overnight, it suddenly burst into flames. 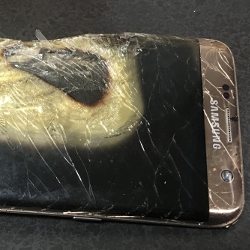 Unfortunately, this is not the first time when users report incidents with Galaxy S7 Edge. A few weeks ago, another case with this phone came out to the public where a smartphone user sued Samsung for physical injuries, caused by Galaxy S7 Edge. The phone suddenly caught on fire in the owner’s pocket and left him with severe skin burns. A similar case has been reported in the Philippines, where a mother signalized that her own S7 Edge burst into flames, while her daughter was using it.

These three incidents, however, are certainly not enough to accuse S7 Edge of being as dangerous as the exploding Galaxy Note 7. The Korean phone producer has not come up with official comments on these most recent burning smartphone incidents yet, but the investigations are on their way. A formal statement and comment from Samsung is expected to be released when the analysis of these three cases identifies the real reasons that may have caused the smartphones to catch fire. Having in mind that S7 Edge has been on the market for more than six months now, there probably is no reason to worry about a wave of suddenly exploding devices of this model. At least, not until more evidence comes into play.